What is it? Complex regional pain syndrome formerly known as reflexive sympathetic dystrophy is an uncommon medical condition which typically affects a limb (arm, hand, leg, or foot) of the body. The affected limb experiences chronic pain that can range from mild to severe, changes in skin color and temperature, swelling, and blood flow changes that can lead to muscle wasting. 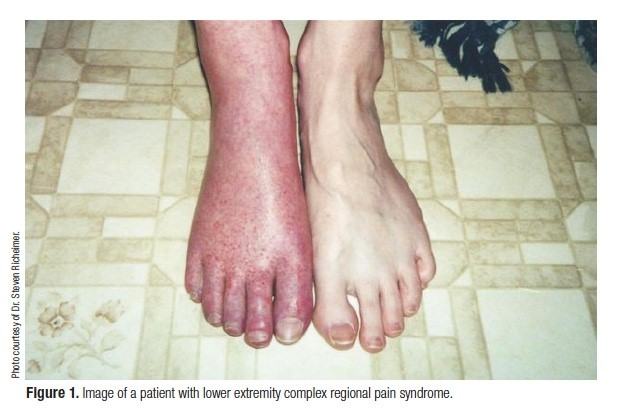 What causes these symptoms? The exact mechanism of the disease is not known, but it is believed the nervous system which sends messages from the brain to the spinal cord and rest of the body malfunctions. Most cases of CRPS are precipitated by some form of trauma. It is speculated that the trauma that has occurred damages the thin nerve fibers (axons) in the affected limb that send messages to the blood vessels which in turn can trigger inflammation and blood flow abnormalities. When the nervous system is not sending messages appropriately due to damage it has incurred an exaggerated chronic pain response can be created that is out of proportion to the original injury.

Who develops CRPS? Anyone can develop CRPS. It is more prevalent in women and on average most people that develop CRPS are in their 40’s. The majority of individuals who are diagnosed with CRPS have had some form of soft tissue trauma, a surgery, stroke, or heart attack prior to the onset of the condition. They then develop pain out of proportion to the original injury that is typically not responsive to traditional pain management.

How is CRPS diagnosed? There is no single diagnostic test for CRPS. The diagnosis is made by a doctor based on the individual’s medical history and how well their symptom presentation matches up with the definition of the disease. Often testing is performed to rule out other conditions with similar symptom patterns first before a diagnosis is made. Conditions like Lyme disease or arthritis syndromes can present very similarly to CRPS.

How does a physical therapist treat CRPS? There are many treatments for CRPS. They range from various medications, surgeries, or even psychotherapy. Physical therapists treat CRPS through exercise and de-sensitization therapy. A therapeutic exercise program can help encourage blood flow to areas that have damaged nerve tissue and assist in the muscle’s recovery as well as help reverse some of the nervous system changes that occur and perpetuate the chronic pain cycle. De-sensitization therapy helps the nerves slowly re-learn that an innocuous stimuli like a piece of material is not harmful to the body. After gradually exposing the individual to various textures, intensities of touch (firm, light, etc.), and temperatures it allows them to not have an adverse reaction to safe stimuli.

Can you cure CRPS? The response to treatment varies between individuals. Younger individuals with CRPS usually recover well. More research needs to be performed to determine what factors lead to a better prognosis, but at this time early recognition and physical rehabilitation are recommended for the best results.