The Importance of Scapular Stabilization for Baseball Players

You may have heard of the term scapular stabilization before, but what is it? Scapular stabilizers refer to several of the muscles that attach to ones scapula which allow the scapula to move as it should. The major muscles associated with this include the serratus anterior, the rhomboids, the trapezius, the levator scapula, and the pectoralis minor.

So why is this important, especially to athletes? The answer lies in what is known as the “shoulder complex.” When someone says shoulder, what do you think of? You probably think it’s where ones arm and shoulder meet. However the shoulder is a complex; it consists of multiple joints and connections that all work together. The picture below gives a basic over view of this: 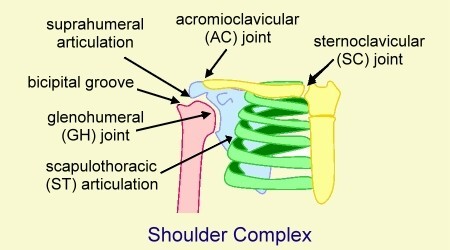 All of the above joints and connections allow ones shoulder to move as it should; freely and without pain. If, let’s say, ones sternoclavicular joint doesn’t work properly they may feel pain, tightness or both when moving their shoulder, especially with overhead activities. Now picture this; the scapula is rotated in a downward fashion due to weak scapular stabilizer muscles. Any time this person tries to raise their arm the top of the humerus (arm bone) crashes into the suprahumeral articulation, as pictured above.

So what’s the big deal? Well, for an elderly person who doesn’t raise their arm up all that often maybe it’s not a big deal. However let’s now picture a baseball player. Think of all of the overhead throwing, the bat swinging, the sprinting (which involves a significant amount of arm motion as well), and other activity required? These athletes do A LOT with their shoulders, so if every time they attempt to use it something is getting jammed serious problems may ensue. Such issues include impingement (which can be VERY PAINFUL), torn labrum, torn biceps tendon, stress fractures, and even torn rotator cuffs. All of these are significant injuries that may lead surgery and long recovery times, which take away from training and may have detrimental effects on an athlete’s career.

Now think about this – all of this pain, surgery and recovery time could have been prevented with simple scapular stabilization exercises, taking only minutes a day. Keeping these muscles in strong, working and well balanced can have huge impacts on a baseball player’s performance as well as help prevent injury.

In truth most people can benefit from scapular stabilization exercises, not just athletes. Many people have muscle imbalances around the shoulder; initially there may be no symptoms however as the shoulder sustains increasing amounts of microtrauma , pain and injury may become apparent. Plus look at it this way – how can they hurt?

The following are just a few quick and easy exercises to help get you started: 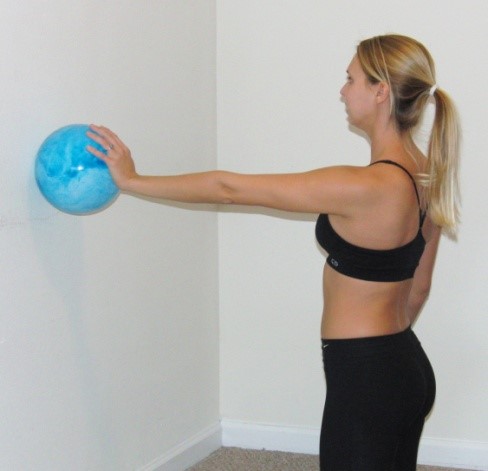 Face standing a wall and place one arm out to the wall. Using a round object (basketball, soccerball, tennis ball, etc) rotate your arm clockwise and counterclockwise. Do not LEAN into the wall, instead press your arm forward to ensure the muscles surrounding the scapula are doing all of the work.

Lying on your stomach (you can do this one on the floor as well) with enough room for your arms to spread out, extend your arms out as if trying to make a “T” with your body and arms. Then, squeeze your shoulder blades together to lift your arms a few inches. This one won’t have much motion involved but you should feel it in the upper/middle back area

(also check out the videos below for some similar exercises:)

Lean against a bed or a table (or even a wall) with your arms locked out straight. Keeping arms straight, push down into the table/bed by pushing your scapula forward then slowly return to your starting position. A more difficult way to do this would be on the floor (in a full push-up position). This is an odd motion, so the following link may help to better understand: https://www.youtube.com/watch?v=ALzFr2GT-Is

As always consult with a Capital Area PT physical therapist if you have any pain, or any concerns with your program